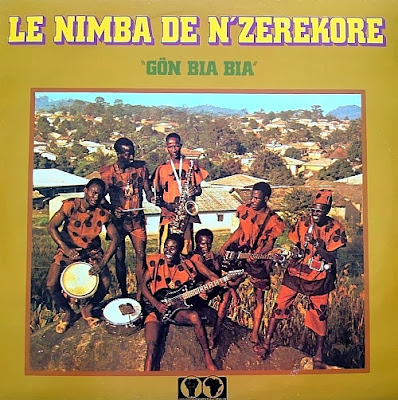 Syliphone magic numbers.....this is 71
from the  forested region and the city of  N’zékékoré
and named after the neighboring mount Nimba
the regional orchestra of Nimba Jazz or  Nimba Jazz de N’Zerekore
under the direction of  Samaké Namakan


and some good news 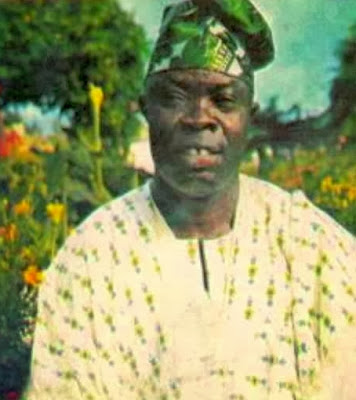 Until the arrival on the scene of Ayinla Omowura and perhaps the popularity in later years of Epe-born Ligali Mukaiba, Haruna Isola reigned supreme as the foremost Apala music exponent in Nigeria . And before he died, he added a feather to his cap by his unprecedented contribution to the development of the music industry in Africa .
With a gentle but compelling rhythm that is steeped in the style of Ajao Oru, leader of an Apala aggregation that first attracted attention in the early 50's to become perhaps the first recorded artist in this music idiom by Philips Recording Company, Haruna Isola truly made his mark and left a valuable legacy behind as the greatest, most popular Apala music exponent the industry ever produced.
His continued success depended on a number of star qualities. As a singer, he bad the ability to create thought-provoking lyrics about issues, places, real life situations and even the philosophy of life where. he was comfortably at home with the use of parables and anecdotes. He consistently projected the virtues of life and living through these channels without soaring to unnecessary praise singing and abuse which later became the order of the day.........>>>> 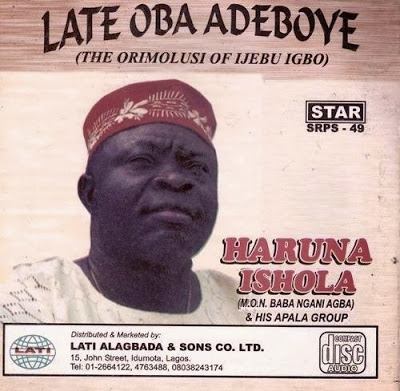 & the  party continues with the Apala  messenger & king (both !) Haruna Ishola


and fished this beauty from yt / enjoy 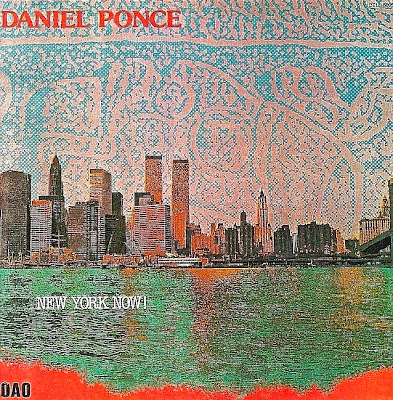 that our timba (sound) is ﬁerce,
our timba is not like yesterday’s.
(Daniel Ponce, New York Now! 1983)
................
Daniel Ponce, himself both a Marielito and a professional rumbero,
composed and recorded “Invasión 80”(New York Now! 1983). Playing with the
stereotype of the Mariel migration as an “invasion,” this recording revealed
the larger history of migration and labor of which the Marielitos and rumba were a part.
“Invasión 80” was a very different rumba from the conga lines that people
had heard and experienced in previous recordings and performances by Mr. “Conga-man”
Desi Arnaz. “Invasión 80” was intended to challenge the Hollywood disseminated
Ricky Ricardo stereotype of Cuban Americans as white and middle class.
Ponce’s rumba also lent visibility to rumberos who had participated
in the emergence of Latin jazz, like percussionist Chano Pozo, who collaborated
with Dizzy Gillespie between 1946 and 1948, the year in which he was assassinated.
Finally, Ponce’s “Invasión 80” also recalled another invasion,
which took place in 1917 during the sugar harvest season in the rural areas
of Matanzas province. According to numerous recollections,borders with his own cohort of Mariel rumberos.
famous rumberos from all over the country traveled the island in search of seasonal farm  work,
and after their arduous labor, they competed among themselves,
elaborating complicated dance steps that demonstrated their ability as Columbia  dancers.
In his album, Ponce paid tribute to these transregional and seasonal workers’ contests,
reminding listeners that the circulation of workers now continued beyond Cuba’s borders.

from The Acoustic Body:
Rumba Guarapachanguera and Abakuá Sociality in Central Park by Berta Jottar 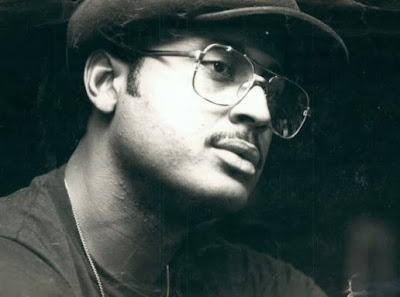 In memory of Daniel Ponce
Posted by nauma at 11:51 AM 2 comments: 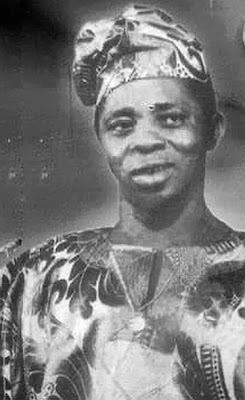 Alhaji Ayinla Omowura,colossus of African music
By Benson Idonije
Te first time I heard Ayinla Omowura in actual performance was in a recording session at
EMI's Oregun studios. This was in the 70s and it was a colourful and exciting session replete
with all the trappings of talent and artistic creativity.
The great exponent of Apala and colossus of African music was there with his entire group
and the recording engineer specially assigned to the band because he was used to their
antics. I saw raw talent and artistic motivation at their best as three albums of 36-minute
duration were recorded effortlessly at a go, with the session flowing naturally and smoothly,
unhampered by unnecessary breaks arising from musical lapses.
The whole thing was written in the mind; and as soon as the first percussive note was struck,
the session took off with the call and response pattern in which Ayinla waited from one
chorus to another, establishing social commentaries with thought-provoking proverbial and
anecdotal lines.
Once he had cause for a retake, but instead of redoing the portion that did not sound

satisfactory, he did it all over again. And this time, even though the rhythmic pattern was in
the same racy, intricate fashion, the singing was not exactly re-enacted in the same
progression, word for word. But thesame message was conveyed and the same meaning was
made - a true celebration of African music.
I stayed through till the end of the recording because I was carried away by the intricate
complexities of his rhythms and the bluesy, down-to-earth voice that sang. I did not
understand the message but the compelling sound of the ensemble and the artistic creativity
of his vocal inflections registered an indelible impression on my mind.
The uniqueness of Anyinla Omowura's music was just beginning to attract public appeal and
his popularity assuming legendary proportions when he died. As a matter of fact, at the time
of his death in 1981, Ebi kii pa'gun dojo ale, one of his greatest albums, was enjoying
tremendous popularity at the number four position of the then Radio Nigeria Top Ten Chart,
whose idea was created by veteran broadcaster Ikenna Ndaguba.
His popularity was more pronounced at the grassroots level, and that is why it was more
visible in areas, such as Mushin and Agege, where all the meat sellers, motor drivers and all
looked forward to his new releases. He was a superstar, an institution and a great crowd puller. I had cause to attend one of his live shows at Mushin on the invitation of his recording
company. I reached the concert venue alright, but before I could get to the stage, it was a
lot of hassle as I was subjected to indignities and humiliation from his follower-ship who
physically barred people from getting through. There were three hurdles to cross. The first
one at the periphery was that of dancers who jumped for joy to the music that floated
through from the distance.
Needless to say that on stage he was power-charged and highly
inspired.
Ayiola Omowura's death was premature and untimely, but he left a good number of albums
behind. His first big hit was Challenge Cup, a social commentary on a football match involving
Stationery Stores, with "Ode tio p'etrin a mura, also in the same album, helping to
consolidate his acceptance. Hit albums, which are also of evergreen interest, are Owo tuntun,
Abode Mecca, Eyin Oselu wa, Egbo tuntun, were were la fin s'ere wa, Shaki n se bi ora, Awa
kii se olodi won, a posithumous release, among others.
A foremost African musician, Ayinla's influence is beginning to manifest itself on the youth
and their execution of the various social music forms of today, a trend which is a glaring
testimony to his innovativeness, and the depth of his creativity. 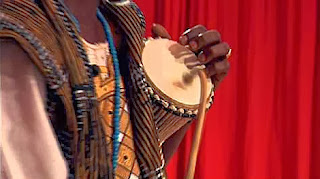 His success was so overwhelming to the extent that he became an-idol to the masses particularly among the public transport drivers, and the traders to mention a few.
In the 10 years that he was on EMI Nigeria label, all his 20 albums sold a minimum of 50,000 copies on the first day of their release. Acutely popular,Omowura’s day of release was always a carnival at garages,Beer parlours and even at parties.,, 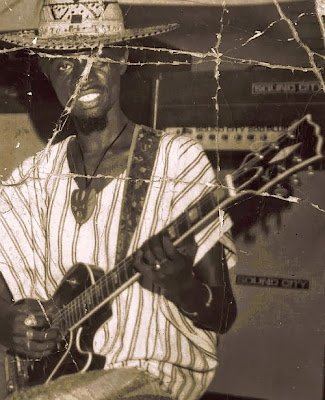 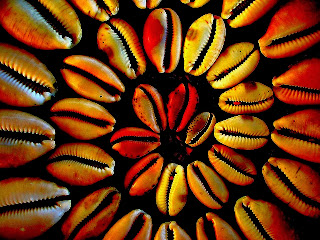 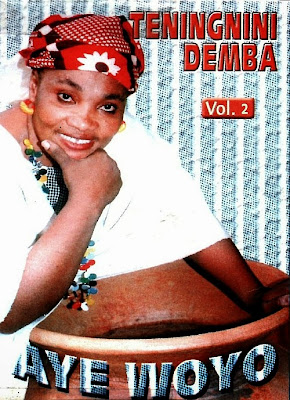 Teningnini Damba as daughter of Bazoumana Sissoko , the old lion, had his legacy  to defend
but  in Aye Woyo she is crafting  some truly brilliant -and  addictive-originals
after-all  Teningnini  is simply great as herself-a lioness  indeed.... 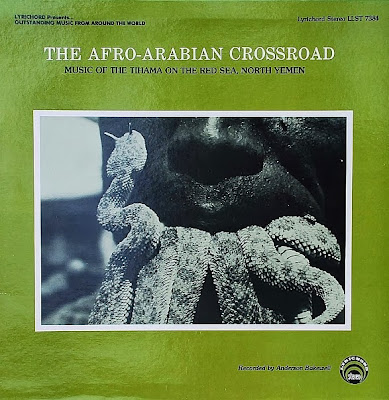 Tibbal music from the Tihama coastal plain of the Yemen on the Red Sea
-recordings by Anderson Bakewell -
an African-Arabian  blend of   lyres, reeds and virtuosic drumming,
performed by members of the Akhdam, or better  "Al Muhamasheen" the marginalized ones,

the outcast group that has a certain reputation for sorcery,among others... 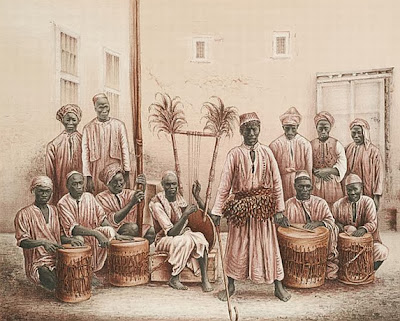 you can read further, this article  in english and this in french,
about the social exclusion of the Akhdam 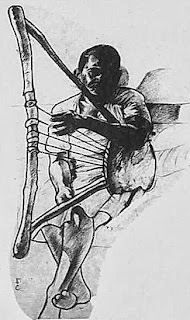